Bowled Over at the Top of the World

Two that got away

Packed to the gunnels with two families, three porters and enough gear for a sizeable village, our taxi-van winds its way out of Pokhara and up the ridge to the start of our trek. Beside the road, dozens of goats are herded together in bleating huddles, awaiting a dire fate. This is the high point of the Hindu Dasain festival, when goats are sacrificed to appease the goddess Durga. “Run, goats, run!” shouts young Benjamin, my Godson.  He and his family are joining us for the first part of our Annapurna odyssey and as the Dad is American, we’re looking forward to testing their baseball skills on our cricket bat.

The first test for all of us, though, is the heat and the hard work of the trail that forces us to regularly climb a thousand feet of stone steps only to drop the same distance on the other side of the hill and start over. We sweat and swelter and take every opportunity to stop for snacks and plunge our heads under water channels. The four lads prove able and eager walkers, egging each other on with an elaborate Star Wars game, while our middle-aged knees and backs hold up surprisingly well. We pass through Gurung villages where the traditional white and ochre houses are giving way to concrete structures, and the thatch and slate roofs to corrugated iron. I spent much of my early childhood in a Gurung village in the next valley and I am nostalgic for the old ways, though I do understand why the people here (like me) want electricity and running water.

Much of the change has been pushed by the thousands of trekkers plying this trail every year, but more is simply the inevitable march from the medieval to the modern. Here the two live cheek by jowl. A giant satellite dish towers over a buffalo shed; a farmer spends his day harvesting rice by hand and his evening watching cable TV; a lodge two days walk from the nearest road has a washing machine and wi-fi. We were pleased to leave computers and mobile phones behind, but equally pleased that our porter didn’t. This is high season and we’ve heard tell of people at Base Camp sleeping on and under dining room tables, so Purna phones ahead each morning to book us a room. Our other porter, Iswor, is half way through an engineering degree and doing this for some holiday money.

Both are unfailingly kind and helpful and show no flicker of irritation at our dithering around with sun screen, hats, sticks, cameras, snacks, water-bottles, purification tablets, toilet paper, hand-wash, binoculars, lip balm and assorted kitchen sinks. Whenever we are finally ready to set off, they simply shoulder their bags and go. And when we stop again – usually ten minutes down the trail – they simply put their bags down and wait. No sighing or rolling of eyes or looking at watches. They’re incredibly stoical and strong, too. Though their pay covers sufficient food, they forgo breakfast in order to save the money, so end up carrying 20 kg for several hours on steep paths in the hot sun on an empty stomach. AND they’re still cheerful. No wonder the British never managed to colonise this country.

Annapurna Base Camp is arguably the most beautiful short trek in Nepal, progressing from rice terraces, through bamboo and rhododendron forests up to the sanctuary itself, where towering peaks rise on every side and the changing light turns the snows from gold to white to pink. When we are there, a full moon rises above Fishtail peak making the mountains glow, then slides away and leaves a blaze of stars. I am shot through with wonder. Hail the Maker.

And what of the cricket? Well, we don’t get the world’s highest game. That honour goes to a mob that played at Everest Base Camp in 1999. They were very proper with twenty-two players, an umpire and even a roll-out pitch. But perhaps we can have the record for the world’s highest improper game. Our pitch is a muddy volleyball court (dodging the net is interesting), our wicket a pile of stones and our players a handful of ring-in porters and a passing Aussie. The air is thin at 4130 metres (13,546 ft), so the ball goes faster but we go slower and huff and puff even more than usual. But it’s worth the effort, and hard to imagine a more spectacular place to play, or a better excuse for stopping than a (literally) breathtaking view. 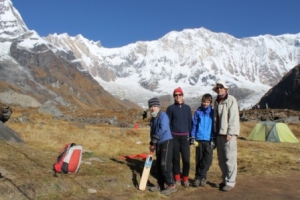 Posted on October 19, 2011, in Uncategorized. Bookmark the permalink. 16 Comments.